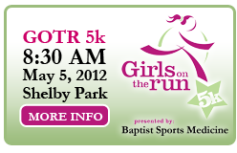 I know I’ve been lazy about updating this – I wrote this a week and a half ago and I’m just now posting it. Enjoy!

My attitude towards fitness has been whiny lately, (“I’m bored! I’m tired”) but I feel much better about it this week. Wednesday was my first practice 5k run with Girls on the Run Nashville, a mentoring program for girls from third to eighth grade.

I’d planned to run to the park, but work ran late and I drove instead, thinking I’d be running a 5k with a fast little girl who wouldn’t be able to understand why I’d be huffing and puffing and trying to keep up. I came to the meeting place and saw diverse group of little girls doing jumping jacks, women ranging in ages from twenty to sixty smiling, and some sharp-looking younger women with clipboards. I went to them and asked if I needed to sign in. They just asked my name.

“You’re with Clemson-Hamston*.* And your buddy is Clara*.”

I quickly figured out that Clemson-Hamston was a school in another part of town, and that the bus hadn’t arrived yet. I waited with the other running buddies, and talked with Adele, a woman in her early fifties who began running three years ago, and Jess, a Penn State intern who was living in Nashville for the semester. We talked until official warm-ups began, a circle of girls and women with one girl in the middle introducing herself and leading everyone in one stretch. From the distance, I heard the unmistakable sound of excited little girls. I looked to my right and saw a little band of them, squealing, giggling, and moving forward fast.

We were paired up quickly.

“Hey, Bud,” Came the unenthusiastic greeting from my running buddy.

Clara was a girl with black braids hidden under her straw fedora hat, a pink shirt covering her little potbelly. I asked her if she liked running.

“Nope” was her reply.

She shook her head.

It was what I’d feared would happen – after rehearsing my best kid conversations in my head all day, here was the one who could see through the hip, fit older sister that I was trying to be and bring me back to the nerdy old community volunteer that I was. I found myself wishing I’d gone to the gym, already beaten down by the 8-year old.

We finished stretching (at my urging) and lined up at the start line. Clara and I were in last place. A sharp, small blonde woman came to me at the moment right before we started.

“She likes to drag her feet. Tell her Miss Jenny said to pick up her feet.”

We ran for ten seconds, then twenty, and then before we were out of sight of the rest of the volunteers at the starting line, Clara stopped to walk. I said it was ok and said we should probably just walk fast, which she did. The group was ahead in the distance by the time she tried to run again, this time a ten-second jog to the bridge. After that, our running spurts were few and far between. I’d ask her how she felt after each one, and every answer was “hungry” or “tired”.

But during our 1:15 5k, I discovered something:

The kid was funny.

As in, mid-nineties Saturday Night Live (complete with impressions) funny: she was slow even when walking, but instead of acting out her frustration the way I would, she started walking and talking like an old woman. She told stories about her home life, running full speed when she described her reaction to seeing a spider in her bedroom and stopping in her tracks to relive her sassy speech delivered to her father, who she’d expected to keep her room free of the eight-legged terrors. At a certain point in our 3.14 miles, her storytelling got so elaborate that it became difficult to coax her along even at a slow walking speed, so I asked her to run for ten seconds like a squirrel; like a duck; like a monster, which she did for twenty seconds, whipping her head from side to side with her straw hat in her mouth.

We finished last. The other little girls ran to us from the finish line and grabbed her arms to pull her across, yelling things like “You can do it!” and “come on, Clara!” Miss Jenny was there too, reminding her (a little too sternly for my liking) that this was a race after all, and we’re in a hurry here.

The Girls on The Run 5k is May 5 this year – here’s the link to sign up if you haven’t already. And this is a race that no one should worry about being too slow to run – if anything, you can hang with me and my running bud.