Surprise – I went to Pittsburgh over the weekend!

I had planned to go up for a visit much earlier this year, but didn’t think I’d be able to do it until I found out about the tooth emergency and suddenly had some free time. I still didn’t have any free money, but figured we’re all going to die one day anyway and we might as well spend as much time with people we love as possible. So off I went!

I had also signed up for a race and luckily was unsuccessful in getting anyone else to take my registration. So, five days out from oral surgery, I got to complete a seven-mile obstacle course on a mountain!

But I’m getting ahead of myself.

Ryan and I stayed with our friends (actually, Ryan’s two sisters and my former roommate) in my old apartment in Squirrel Hill on Friday night. Catching up with them over a few beers was relaxing and reassuring. I didn’t fully realize it when I lived there, but I was lucky to have so many people around me to kick around thoughts and ideas with. I went to bed before I was ready – my brain was still lit up from our conversation, but I knew I had to get some sleep for the next early morning.

As I was lying in bed, I thought about the race, how utterly unprepared I felt, how something must be wrong with me that I felt like dropping out wasn’t an option at this point. My body was tense. I noticed it and told myself that my job at that moment was to sleep. My job tomorrow would be to run up a mountain – but that was an issue my future self would just have to figure out.

Garrett came in the morning to pick us up and take us to Seven Springs, completing our three-man (two-man, one-woman, actually) running team. Our track record (pardon the pun) is getting pretty good now – the three of us also ran the Cherry Blossom 10-miler together last month. Running was a secondary thought, however, as we focused instead on finding a Sheetz for breakfast. Unfortunately, we drove all the way there without finding one, so picked up our packets (with a HUGE tee shirt that, once again, masqueraded as a small) and grabbed a bagel at one of their little cafes.

As we wandered outside to wait for our wave to start, we happened to catch the start of an earlier wave. My jaw dropped.

Yup. They were running up a mountain all right. I repeated to myself that that would be my job when the time came, but it wasn’t 10:40 just yet, so I would save myself the worry.

One by one, the waves took off. 9:40, 10, 10:20, and then it was time to line up. There were probably less than 100 people in our wave, making it the most comfortable starting line I’d ever been in. Normally I’m squished into a space between taller runners nervously looking at their watches and crane my neck to see ahead. This time, Garret, Ryan and I stretched, talked, and listened to the DJ who performed for all waves. The event wasn’t timed, so there were no watches. The starting line was just ahead of me, so there was no neck-straining. Instead of shuffling towards the start, we all took off at the same time. 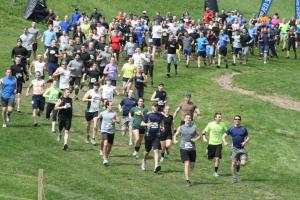 Down at first, then up. Way up.

I told myself I was in for a long race. Momentarily considered what would happen if I turned around and ran back towards Ryan’s family, who were all watching at the bottom. I decided I wouldn’t like the outcome of that and just kept pressing on. Looking up, I realized, was a mistake, since it seemed to go on forever and all I could see were the runners directly in front of me and the sky behind them.

Inexplicably, we suddenly found ourselves on flat ground and I saw the first obstacle – a net to climb over. It wasn’t as tall as I thought it would be, but I remembered reading once that these things were harder than they looked. Amazingly, it wasn’t. It was easier. I was up and over in a matter of seconds, and was rewarded with a stretch of flat ground to run on.

I started running downhill and saw the second obstacle.

A water slide? Already? Oh, what the heck.

I slid down it head-first beside a girl who looked like she could kick my butt in her sleep.

A long upwards hill awaited us on the other end of the waterslide, followed by an incline that wasn’t a hill as much as it was a wall of grass, properly named “the baby crawl” because some people found it easier to put their hands out and crawl up it. Once we’d gotten up, we got down again to crawl under barbed wire. I’d never thought about crawling under barbed wire before, but I was surprisingly good at it. I didn’t army-crawl as much as I just positioned my legs high and kicked back, but it worked out well. I got out from under it much faster than a lot of the brawny army guys.

We waded into a pond next and went under three sets of barrels. I had been under the impression that we’d try to walk across them and might fall in, but it made me feel better to know that we were all submerged in water. 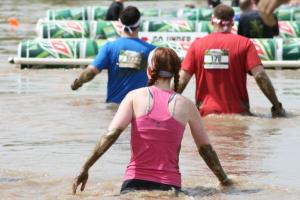 “Pole-land” came next, a series of slippery poles (some with barbed wire wrapped around them) and slippery mud and rocks underneath, forcing us to go over and under. After our last over, we ran through more slippery rocks and mud, through muddy tubes (kicking again) and through some more water. We climbed up a boulder and ran down a long, muddy hill. Here, the lack of obstacles and decline made it easier to appreciate the beauty of the hills in the distance, as well as the people around me. I made a friend in the girl struggling to keep up with her two male friends ahead. She had never run a race before, but she was having fun on this one.

At the bottom was a series of ropes over another pond, where we scooted across, then ran up a hill that seemed like it would never end. I kept talking to my new friend and eventually the end of the hill came. I said goodbye and began running towards the eight-foot walls that I’d been dreading.

I think you’re supposed to run and jump on them, but I knew I’d need some help. I got on one knee and helped everyone I could so I could take someone else’s help without feeling like I’d left people behind. Really this entire race was a mental exercise as well. I kept wondering where to put my foot next or how I was going to get my body past the obstacles in one piece. The walls were really the epitome of that. Once I was on the wall, I wondered how to get down and eventually jumped. 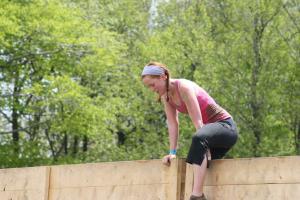 We ran up and over a giant hay bale 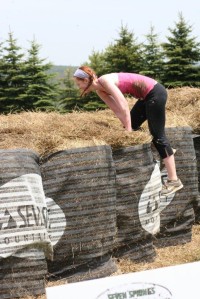 …and waded in a dumpster filled with cold water. There was a wall inside that we had to duck under, officially making it the grossest obstacle we’d done. There had been hundreds of dirty, sweaty runners in this same small vat of cold water before me, and the color of the water really didn’t hide that.

I was out soon, though, and headed down another steep slippery hill to the last obstacle, Mount Everest.

I was excited when I first saw it, knowing it was the last one, but my excitement gave way to strategic thinking when I saw how giant and slippery it was. Not to mention that it was real snow, meaning real cold. I slid down at once, then ran back away from it to get a running start. It was cold and hard to get up, but I made it to the top and could now see the finish line at the bottom – I just needed to slide down it now.

Sliding down was also a challenge. There were deep grooves where other runner’s feet had been, making a ridge in the middle where you were meant to slide. It was slightly painful, so I put my hands down to slow myself, which was more painful. I just told myself that I’d be at the bottom soon.

I slid into another mud puddle and ran across the finish line. 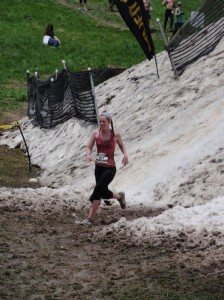 I met Ryan and Garrett and the whole gang again – Ryan and Garrett’s families were also there to watch and drink beer with us after the race. We were muddy and stinky and hadn’t had so much fun all year. I’d definitely recommend one of these to whoever is starting to find running stagnant – nothing beats playing in the mud.

*All of the amazing photos are by Diane Lynch. She took more of the boys:

1 thought on “Mud on the Mountain Recap!”