I haven’t been blogging this week, mostly because it felt like a lie to write about my life and leave out a very important event that I just wasn’t ready to share yet. Now those who needed phone calls have gotten them, and the announcement is out there. So here’s the scoop:

We’re engaged, and I’ve been on top of the beautiful world all week. It’s the best feeling ever.

The song pretty much tells the story like it went down: it was raining very aggressively, we walked up a hill to look at the Nashville skyline, and Ry got out his guitar under my umbrella and sang Murder in the City, by those insightful Avett Brothers. He put it back in its case and took out the ring. Asked.

And it’s been a beautiful week.

Yesterday I did another mud run with Callie – the Nashville Muddy Buddy. I’d told her about the engagement earlier this week on one of our bi-weekly gym sessions, so I wasn’t bursting to tell her a secret the whole time. She came and picked me up at 7:30 and we followed their website’s directions to Cheatam Wildlife Management Park, about an hour from Nashville. We got slightly lost, but ended up getting to the park in time. There were kids under the driving age directing traffic, so understandably they were confused and overwhelmed. We thought our spot was far away, but a parking attendant told us we were lucky, some people were parking miles away.

We headed for packet pick up and were told by twelve year old volunteers that they’d run out of bags and all tee shirt sizes except larges. A little annoying, since they knew how many people were coming and who’d requested what size (small for me) and we certainly weren’t late picking up our packets, but we shook it off.

We waited for our wave to take off and ran through the beautiful park. My heart just ached when we ran through a shaded trail with the sunlight coming through the trees – that light is just one of the things that makes life worth it. We made it past several obstacles, all relatively easy: climbing up cargo nets, scrambling over short walls with footholds, army-crawling under more cargo nets, etc. Some obstacles required two of us, like a short blue wall we had to scoot along small boards to make our way across, but couldn’t touch the top of the wall, so we had to grip each other’s arms as we made our way across.

Throughout, the ill-placed water stations were manned by overwhelmed children, some panicking as they struggled to pour water for the never ending stream of runners. I felt badly for them and baffled by the race organizers or whoever thought that was a good idea.

The obstacles got more difficult towards the end, where the crowd of spectators were. There was a tall metal wall with small bars spaced across it and a rope, which we used to climb up it. It was hard, but it was the first time I could definitely tell that my weight training was paying off; for the first time ever, there was no doubt that I’d made myself stronger (thank you, kickboxing classes!) It was very empowering to pull myself up to the top and climb over.

The second to last obstacle was a wall doused in soap and water with another rope to pull ourselves up. This one was slanted and shorter, but it was still difficult to figure out how the angle of the body would affect your ability to get over. There was a (grown man) volunteer who took hold of mine and Callie’s legs to help us over when we’d tried several times and slipped. I’d also gotten soap in my eye and was trying to get over with my eyes shut tightly.

The mud pit was last, a pool of mud dug out for the event just before the finish line. This was by far the most fun obstacle. We just crawled on through and onto victory. I still had my eyes shut and was trying in vain to rub them with my muddy hands.

Callie saved the day with some water, which I used to flush the soap out of my eyes. We tried to get a post-race beer that we’d paid for along with our registration fee, but they had run out. Imagine that.

In spite of the rookie logistics, we had a blast. I’m lucky to have friends (as well as a husband-to-be) who are active and up for anything! 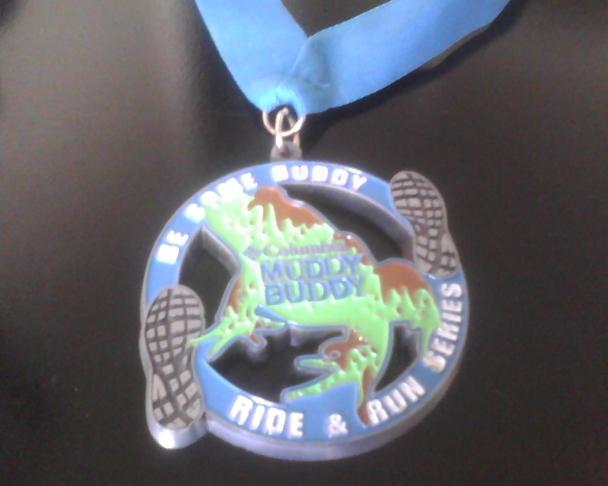